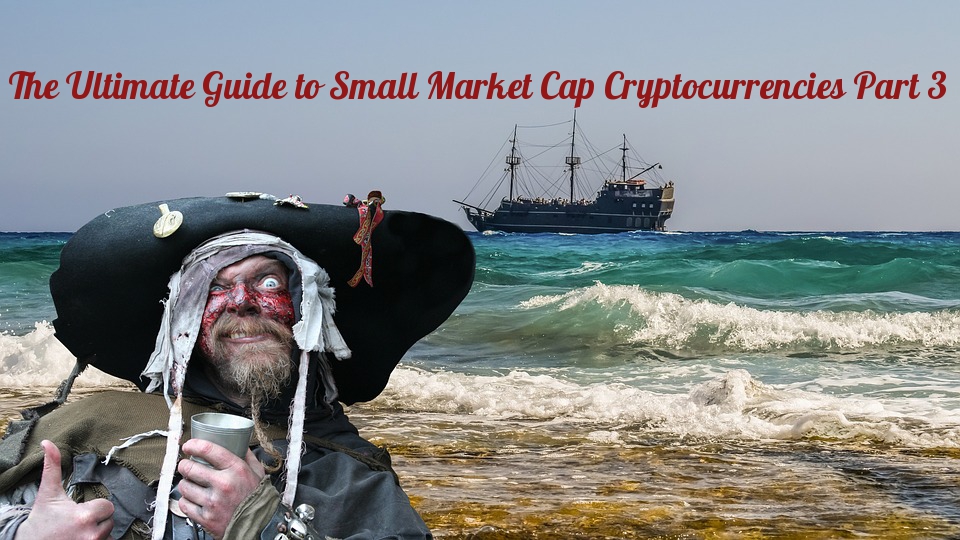 We imagine you were likely able to guess at least one of the following five small market cap projects we’re tackling in Part 3! If not, don’t worry, we still have two more upcoming parts to this guide. If you haven’t read up on Parts 1 and 2, you can find them here:

In Part 3, we’re taking you through five small market cap cryptocurrencies which are remedying inefficiencies and vulnerabilities across a wide range of industries – from a blockchain-based ticketing solution, to a process-led platform enabling transparency and trust in decision making processes and voting, all the way to a zk-SNARKS encrypted privacy coin created to safely store and send your “loot” (right, matey?), we’ve got you covered.

As always, it bears repeating that this post and guide should be taken as an introduction to 25 of our favorite small market cap cryptocurrencies in today’s blockchain ecosystem, and you should conduct your own research and due diligence before investing in any of the above (and below) altcoins. We hope you take something of value away from this guide, and are eager to hear in the comments if you think we missed any projects/altcoins. Keep in mind that they might already be in the queue for Part 4 or 5!

Finally, the below cryptocurrencies in this guide are not ranking in any particular order and their  market capitalizations are accurate as of date of publish (and of course, likely to change).

Now, let’s get started. Below are the next 5 small market capitalization cryptocurrencies and altcoins we think you should be keeping an eye on this 2019.

An all too large percentage of blockchain projects and cryptocurrencies have secured their hype and prominence in the community due to no more than an “idea,” which has unfortunately become the norm, but ultimately failed time in and time out to lead to the actual materialization of that idea. Not GET Protocol. Short for ‘Guaranteed Entrance Token’, Get Protocol is the blockchain amalgamation of an already successful and integrated ticketing solution – GUTS Tickets – which has sold over 120,000 tickets in their three year quest to bring fair ticket prices and transparency to fans across the globe.

Specifically, Ethereum-based GET Protocol is a response to today’s extortionate and opaque ticketing industry (and secondary market), furthering a transparent ticketing ecosystem through the:

GET Protocol’s website dives deeper for those looking to understand what’s “under the hood” of the project, noting that the GET Protocol is equivalent to the engine of their ecosystem – whereby tickets are distributed thanks to “fuel” from the GET token. The “fuel” generated by the GET token ensures that tickets ultimately end up where they are meant to go, and is able to account for change in ownership and other modifiable details which may occur leading up to an event or concert.

Furthermore, the GET Protocol isn’t just geared towards individual buyers and event-goers, they also account for:

Simple and practical. That’s what blockchain needs. And, it doesn’t hurt that it’s curbing an industry where an estimated 30% of all tickets are resold at markup.

To read up further about GET Protocol and GUTS, you can head on over to their website and read their white paper or check out their blog.

We’ve written about Bounty0x back in May, when we spent a few months using their platform to complete various article writing and Twitter bounties, so this is a project we’ve been keeping up with for a while. Similar to GET Protocol, Bounty0x embodies the desired and rare blockchain dream of an actual working (and highly functional) product. At its core, Bounty0x is bringing the Wild West to this modern day “gold rush” via a decentralized bounty-hunting platform for the token economy.

Simply put, Bounty0x enables users to complete “bounties” or micro-tasks (ranging from marketing, to software development, to more holistic and creative tasks), and receive cryptocurrency as a reward. And for those not alive during the 1800s and unfamiliar with how the bounty hunting process works, Bounty0x’s comprehensive ecosystem consists of:

But, this sounds a bit like Upwork and Fiverr?

Wrong. It’s so much more. Bounty0x is token agnostic, enabling bounty hunters to be paid out in any token on more than six different blockchains (Stellar, EOS, Ethereum, Waves, Tron, NEO), and highly specialized, implementing a decentralized verification mechanism and automated payment system for swift and guaranteed payment (personally, we’ve had sums tied up with Upwork for far too long).

Additionally, such freelancing and incentivized task websites are unable to handle hundreds or even thousands of submissions at once, and do not support third-party submission verification – availing freelancers and businesses to arbitrary acceptance practices and release of payment.

Bounty0x is built for individuals and business looking to have unique requirements and tasks completed in an effective and secure manner.

It should be no surprise that confidence in our traditional democratic, voting, and decision making processes is at an all-time low – just look to the 2016 U.S. presidential election which was plagued by accusations of collusion between the Trump campaign and Russian officials, or Australia, which has endured systemic malapportionment of electorates. The point is, this is just the tip of the iceberg, and democratic institutions and societies are in dire need of an actually transparent, fair, and secure voting platform.

Horizon State is geared to restore and repair confidence in government and organizational processes through accountability and immutable consensus, entitling voters and constituents to see, firsthand, how their votes and decisions are received and implemented. This could be a nice boost and incentivizing platform for voters and increasing abstention rates due to the belief that one vote “doesn’t make a difference.”

With Horizon State, every voice and vote counts and expressions of opinion are truly secured and protected, empowering individuals, communities, and enterprise to “identify points of contention and measure consensus with integrity.” Horizon State’s decentralized voting and community engagement platform is based on three core pillars:

Organizations and institutions can now have a clear understanding of individual and community needs, leading to increased meaningful services, responsiveness, and genuine solutions to problems which clearly aren’t be solved by today’s democratic processes. This isn’t just some utopian ideal either, Horizon State is partnered with MiVote – an Australian polling and information platform – and has assisted and facilitated in the casting of tens of thousands of votes.

And, from 2019 onwards, the Democratic Party of India is set to use this new technology to consult its citizens before determining policy positions. Note that HST was also utilized in New Zealand’s TOP leadership election race in December of 2018.

To read up more about Horizon State, its growing list of partnerships, and media publications, head on over to their website and check out their white paper and media corner.

Originating from the Flying Dutchman of interoperable blockchain ecosystems and blockchain technology solutions – Komodo – Pirate Chain is a 100% fully private send cryptocurrency, and possibly the most secure and private of all cryptocurrencies to date (we’ll get to this down below mateys). Yes, there are likely more pirate puns to follow as well. Most notably, Pirate Chain is the product of Komodo Platforms assetchain feature, which sanctions the creation of an assetchain specifically for shielded and private transactions (you can read about Pirate Chain’s birth and evolution here).

Pirate is also secured by delayed-Proof-of-Work (dPoW) from Komodo (on top of Zcash’s Equihash Proof-of-Work consensus algorithm), which authorizes higher than Bitcoin grade level security to the blockchain. The Pirate Chain website emphatically notes that in order to 51% attack Pirate Chain, a malicious actor(s) would first need to 51% attack Bitcoin.

Pirate Chain has been rolled out and brought to the high seas of blockchain sailing full mast, tackling Zcash’s “fungibility problem” through the “elimination of transaction functionality to transparent addresses in its blockchain,” keeping all transactions private by default while only accepting “Sapling” shielded transactions (the best version of zk-SNARKS technology). Simply put, no user and transaction metadata is ever “left” on the Pirate blockchain.

Furthermore, Pirate Chain is fully decentralized, inexpensive for both customer and vendor, and boasts transactions which are confirmed within minutes – all features which stand to save global vendors and merchants (potentially) billions of dollars through the repudiation of facilitation fees. It’s also able to be run over the TOR network (as noted in Part 1: DeepOnion) to obfuscate one’s IP address, for enhanced anonymity.

So, the question begs, are you ready for a world of truly private decentralized payments, or are you going to walk the plank with traditional, vulnerable, and translucent “privacy” coins pushing false doctrine? I had to get one last Pirate pun in there.

You can read up further about Pirate Chain and its quest to become the Black Pearl of all privacy coins by heading on over to their website and brushing up on their black-spotted white paper.

Founded in 2016 and based out of Switzerland, Melonport sports one of the more unique names in today’s crypto-sphere, and is a blockchain based protocol (watermelon Protocol) and decentralized, permissionless, and public infrastructure for the secure management of digital assets and cryptographic token assets on the Ethereum blockchain. At the heart of the watermelon Protocol is a collection of smart contracts (Solidity) which permit trusted transactions and agreements between anonymous and disparate parties without the need for a highly centralized and vulnerable asset management middleman and third-party.

Cutting out traditional asset management middlemen and third-parties allows for a financial management ecosystem which operates at a fraction of present costs, with increased security, tangible transparency, and minimum trust. Driving the automated and decentralized asset management platform are four main components:

Melonport’s comprehensive watermelon Protocol is poised to achieve heights the traditional investment management industry (estimated at US$84.9 trillion) has so glaringly failed to do, ultimately increasing investor protection in an otherwise ill-protected environment, reducing fund cost operations, authorizing fund investment at any scale, and leveling the playing field for novice and savvy managers.

To read up on Melonport and why watermelon should be your favorite new fruit (and protocol), check out their website, Medium page, and green paper (like a white paper but green!). Also, if you’d like to acquaint yourself further with the difference between protocol tokens and traditional asset tokens, check out this comprehensive blog post.

And so that concludes Part 3 of our 5 part guide to small market capitalization cryptocurrencies and altcoins. We hope you were able to learn about a project or two that you weren’t familiar with, or decided to take a deeper look into a blockchain project that was already on your radar.

In Part 4, we’re walking you through another five small market cap cryptos tackling everything from decentralized fog computing, to a blockchain-powered IoT network for food and pharmaceutical networks, all the way to a community run cryptocurrency lowering overall costs for merchants across the globe, so make sure to keep an eye out for updates about its release!

Make sure to give us a follow on Medium or Twitter (@blockchainseo) to stay in the loop for future educational and informative cryptocurrency and blockchain content/news. Finally, you can find Parts 1 and 2 below:

Let us know your favorite cryptocurrencies and altcoins in the comments!